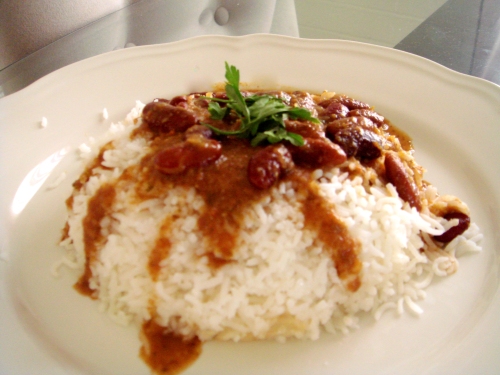 The other day I was talking to one of my ‘bestest‘ friends, B. Now married and living in the Middle East, she is one person who comes closest to being my replica. A fellow Capricornian, her traits are quite similar to mine. We have had our ups and downs, periods where either did not know what’s happening with the other, but, somehow, and mostly because of the effort she has put in staying in touch, we are still the ‘bestest’ friends.

Growing up, we have had numerous meals in each others houses- her mom, for me, is one of the best cooks I know and for her, the same holds for my mom. These days, both living the lives of housewives, our phone conversations have evolved from normal school bitching to talks about our housewive roles! Its quite funny to see both of us exchanging recipes on the phone- two people who never entered the kitchen before marriage! How life takes a turn!

B religiously views my blog. She wanted my mother’s rajma recipe. So here I am posting it for her.

Rajma Chawal (red kidney bean curry served with rice) is a dish very dear to north Indians. It was and still is one of my favorites. My bhua (my father’s sister) would make it for me every time we went to visit her. For long, I hardly used to eat rice. The only time I would serve myself some would be when there was rajma as an accompaniment (Yup, that’s how much I like rajma!). It’s also one of V’s favorite dish. In fact, I’m yet to meet someone who doesn’t like rajma chawal.

Its a very popular favorite Indian dish. Its comfort food in the true sense. A statement made true from the fact that at Vaishno Devi, the holiest Hindu temple, the staple food served is rajma chawal. After a tiring trek, getting piping hot rajma chawal is just purely heaven, especially when you are in God’s abode!

The trick to good rajma is the grating of the onions. I have tried both- with finely chopped onions and grated onions. The results have been significantly better with the latter. Go figure! I think its the “juice” from the grated onion that helps permeate the dish with flavor. I also think grated onions gives a thicker gravy. These are just my assumptions, and even though grating the onions is definitely more effort, I find the results worth it.

I have also learnt that the Rajma masala freezes really well. When you want to make the rajma, just remove the masala from freezer and put in pan on low flame. Pressure cook the soaked rajma with salt, and once beans are soft add the rajma masala and cook till you get the required consistency.

In a blender, puree together the tomatoes, coriander leaves and the green chillies.

In a wok (kadhai), heat 1 tbsp oil. Add the grated onions and fry till golden brown. Add the ginger-garlic paste, turmeric powder, red chilli powder. Sauté for two minutes on medium flame. ( Sometimes, I add a bit of cumin and coriander powder, but this is optional. Also the stated amounts are an approximation- I taste and vary the amounts accordingly.)

Add the pureed tomato mixture and fry till the oil separates (can take about 15-20 minutes). Add 1 tbsp rajma masala.

For the Kidney beans:

Soak the red kidney beans overnight. Drain and wash them. Pressure cook with 1 tsp salt with about 4-5 cups of water till the beans are soft. It usually takes 1-2 whistles for me, but depending on how long you soak the beans and your cooker, it might take more whistles.

Pour the rajma masala in the cooker with the boiled rajma. Mix. Mash some beans with the back of your ladle. Add salt, if necessary.

If required, add more water. In case its too watery, cook open for several minutes. Once the masala is poured in with the boiled rajma, you should let cook on medium flame for about 10-15 minutes for all the flavors to be soaked in by the kidney beans.

Garnish with coriander leaves. Serve hot with rice and curd.