Learn how to turn a kitchen failure into a Success: Macaron Cake 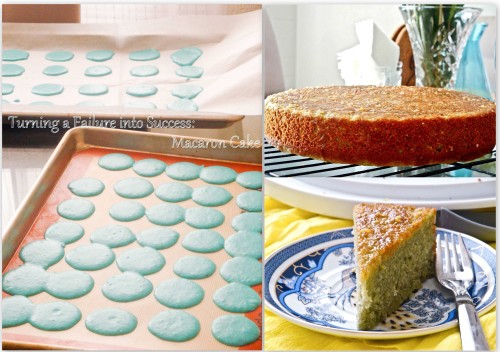 Some are good at finance.

Some are better at marketing.

Some have an artistic bent.

I, on the other hand, have been struggling to find out what I am good at it.

And till recently, I was clueless.

I know I am a decent baker, but to say I am great at it, would be a stretch right now.

Thanks to this blog though, I have realized what my thing is.

I am a problem solver!

Yup that’s my thing and that’s why God, the Almighty, keeps throwing these problems at me.

(For actual effect, imagine a figure in an angelic white robe with an ethereal aura talking in a god like tone saying this)

“Child, I know you are good at this and that’s why I give problems to you.”

God keeps giving me problems. And I keep solving them :)! 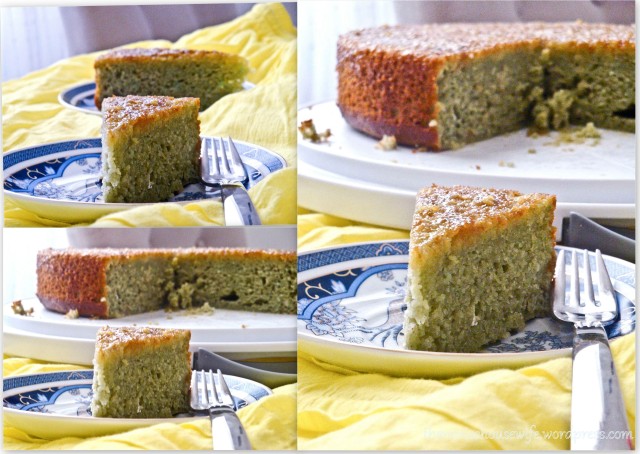 We had a baby shower and everyone was to bring a dish- I thought I would take macarons.

Yes, I do give myself some pretty tall orders.

I decided to make lavender macarons- and thought of adding blue color since our friend was having a boy. I also thought I would make some green tea and chocolate macarons too.

My first go was at the lavender macarons which were blue and they were a disaster- they never got feet- they crumbled when I tried to remove them from the silpat- it was an utter mess!

I guess the lavender macaron batter got messed up-

1. Because I think over beat the egg whites and

2. To incorporate the blue colour, which was liquid, I over beat during macaronage.

But, I feel the main reason was that God thought this would be the best way to test my skills at problem solving. To make me better at it.

So when my first macaron batch for the baby shower got ruined. I did not lose hope. I was sure I would be able to do something with the “failed” macaron attempt. I made a cake instead with the failed macarons- which by the way, turned out great.

And, for being so positive about the failure, God rewarded me with a near perfect next batch (of green tea macarons) with feet and all.

I was making a layer cake, and the cake crumbled when cutting the layers. What did I do?

I made cake sandwiches!

I got together all the broken cake and since the cake was moist, the crumbs stuck together and I could pack it together to look like a 1 inch sheet cake. With a cookie cutter (or a bottle cap, in my case), cut small round circles. Take cupcake liners. Put one small round at the bottom. Put a layer of frosting. Add another cut cake round on top and frost like you would frost a cupcake. No one would ever know that this was a disaster!

Other examples of my great problem solving at work:

So don’t give up when you see that cake crumbling, or the macarons not developing feet or the frosting seizing up.

Take my advice, (and take it pretty seriously), as it is coming from a certified problem solver,

If you keep a positive attitude, everything can go wrong and you will still end up with a winner.

I wish I had a recipe for it-because it was really really good. Loved the lemon curd glaze with a hint of lavender and lemon in the cake. And the citrus orange juice gives it a new level. But I’ll try to recall as best as I can.

Firstly, you will need a failed batch of macarons. To those who are new to making macarons, or are dealing with humidity in your kitchen, this step is a breeze!

Secondly, which is the most important step to get a great cake and do read carefully, because you don’t want to mess this step:  Once you have miserably failed in your attempt to make macarons, and have broken pieces of macarons, do not and I repeat do not lose hope and throw them in the dustbin!

Once, you have established faith in those failed macarons, you can proceed to step 3.

Pulse the macaron shells with some heavy cream (there was an open packet in the fridge with very little cream and I wanted to finish it), a little orange juice (because I wanted to get rid of that too and thought the citrus flavor would be great for the cake), add the leftover yolks (the ones leftover after using the whites for the macarons and the ones that could not be used in the lemon curd), add milk, a little of the lemon curd- and blend all together.

Then fold in sifted flour, baking soda and baking powder. I think I added some vegetable oil too- not sure though.

Once baked (at 350 F for about 30 minutes- I kept checking till I thought it was baked), I had some leftover brown sugar from the time I made caramelized pineapples– the brown sugar had a hint of malibu since the pineapples were soaked in rum. I used the malibu soaked brown sugar mixed with whatever was left of the lemon curd for the glaze.

And boy, I am glad I did! Loved this cake!

Really wish I had a recipe because I would like to try this again.

Some mistakes are really fun to just make once!

So next time my macarons crack or do not resemble anything like macarons I know what to do- make a cake!

Note: The cake was actually quite simple to make, all the liquids were blended in the blender and then folded in the dry ingredients. I did not even measure the flour. Looking at how liquid the liquid mix was added the flour. And the cake was really moist and the sweetness just right. Whoever said baking had to be an exact science, did not mean it for Problem solvers like me! 🙂

P.S: Check out my Blogiversary Giveaway!

16 Comments to “Learn how to turn a kitchen failure into a Success: Macaron Cake”