In one of the scenes in the movie “It’s Complicated,’’ Meryl Streep and Steve Martin, go to Meryl Streep’s bakery. It is late at night and both of them are hungry, really hungry. She offers him anything on her bakery menu and he chooses chocolate croissants. The scene of her cutting and stuffing the croissants with chocolate is tantalizing.

That movie is one of my favorites, primarily because of Meryl Streep’s kitchen and the idea of owning and running a bakery like hers. I could watch that movie again and again, just to relive Meryl Streep’s life in the movie. The movie also makes me want to whip up croissants like that.

So when this month’s Daring Bakers’ challenge was to make croissants (something that had been on my to-do list for way too long), I was happy. Very happy.

The Daring Bakers go retro this month! Thanks to one of our very talented non-blogging members, Sarah, the Daring Bakers were challenged to make Croissants using a recipe from the Queen of French Cooking, none other than Julia Child!

Till date, the best croissants I have had were *drumroll* NOT in France. Would you believe it, I never tried the croissants when I was in France!! Well, we were in Paris for little over a day only and somehow I did not get the opportunity to try one! I guess its for the best- this way I owe the French croissants another trip!

The best croissants I have ever had were actually in Turkey where I had joined my parents for a vacation. We were staying in a small house kind of hotel/motel in the heart of Istanbul. Everyday the owner would serve us one croissant each with half a tomato, 3-4 olives, cheese and an egg cooked any way we liked. The owner used to get the croissants fresh from a nearby bakery. That croissant was the best I have ever had (and so was the breakfast) and the taste still lingers in my mouth. The croissant was exactly how it should be- buttery, flaky outside and moist inside. The crust would crackle when bit into. They were just perfect and delicious. If I had the cash, I would make a trip to Turkey just for those croissants! 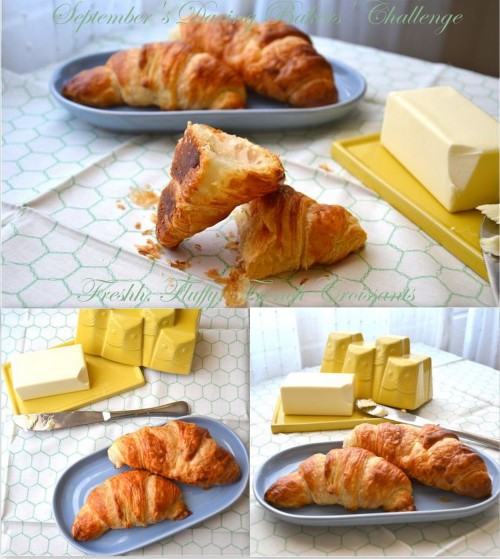 I have tried making croissants once before. About two-three years back. I was in India at the time. And Indian summers are one of the worsts to try making croissants and everything from the word go went wrong with the recipe. The high amount of butter in the recipe ensured that the croissants were still edible (and tasty), but they were nothing like croissants. After that I never tried.

I did have a shot at laminated dough- the puff pastry dough. The dough was a success and is one of my favorite go-to recipes.

Equipped with that success, I was still not confident about giving croissants another shot. And thankfully, Daring Bakers’ came to the rescue.

It’s probably a good thing that croissants are so fussy to make or I’d be eating them every day. The whole process of making the croissant dough, laminating it with butter, shaping, and baking is almost a two-day affair. But, its SO WORTH IT! 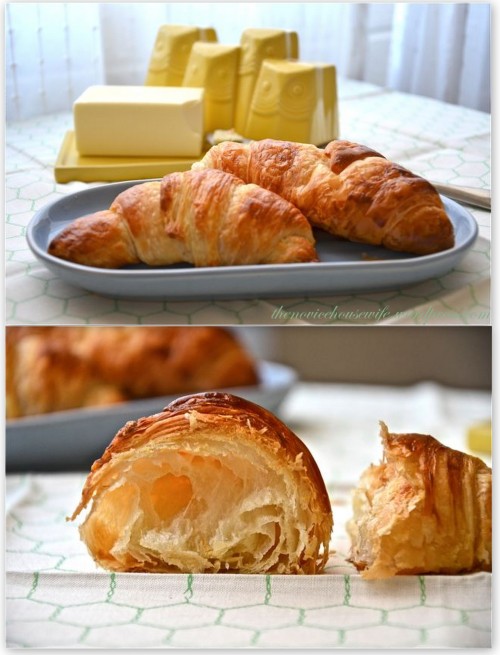 Many people say that croissants originated in 1686 in Budapest, Hungary by a courageous and watchful baker, at a time when the city was being attacked by the Turks. The baker’s alertness help destroy a tunnel that the Turks were using to get in the city. The baker became a hero, but a humble hero — all he wanted in reward was the sole right to bake a special pastry commemorating the fight. The pastry was shaped like a crescent, the symbol of Islam, and presumably meant that the Hungarians had eaten the Turks for lunch.
The idea of having the best croissants in Turkey seems even more astonishing now, does it not?

But, this story is all made up, first showing up in the first version of the great French food reference Larousse Gastronomique

, in 1938. Later on, the story switched locations to Vienna, during the Turkish siege there in 1863, but that was also a fabrication.

No one knows when or where the first croissant was baked, but it was definitely in France and certainly not before 1850.

Whatever the origin, I am glad they came into being. 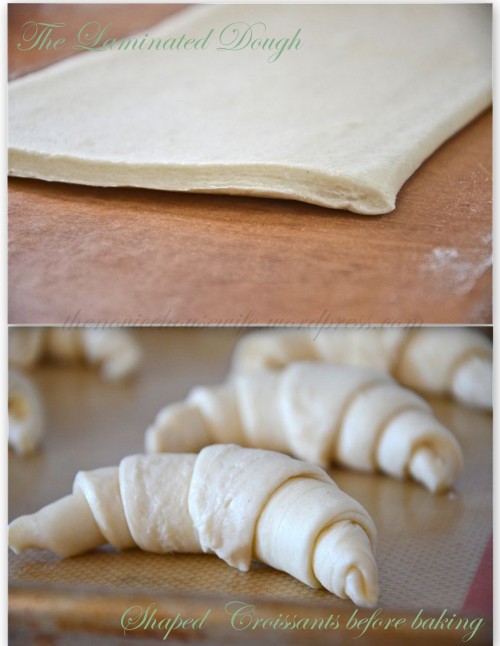 The process of making croissants is not a fairly easy one, but thanks to the many tips (especially those by Audax and Txfarmer) on the Daring Bakers’ forum and the wonderful recipe by Sarah (and more thankfully, a favorable weather here in my town), I was able to make flaky and buttery croissants.

Next time I will definitely double the recipe. Though the original recipe yield is 12 croissants, I followed other members and made only 8 bigger sized croissants. Also, next time I will also reduce the salt called for

in the recipe, as I found the croissants tad salty. I will also try whole wheat ones and chocolate ones.

Though the recipe is the same as given by Sarah, the steps are a combination of Sarah’s and Txfarmer’s.

The dotted lines show where you have to cut the dough. 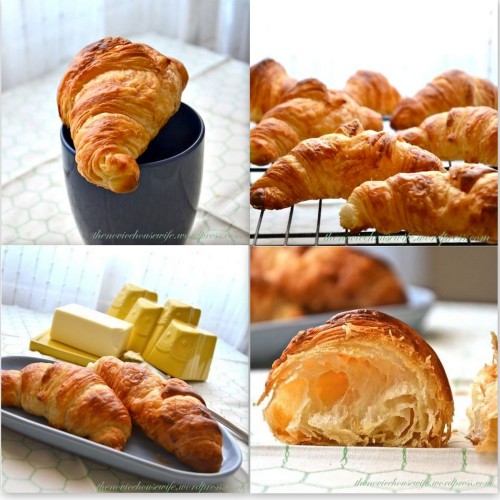 Other sources to help with croissant shaping and kneading the dough: