…and a lesson in knowing your “Moong” dal.

When I was in India this time, somebody asked me, why is your blog called the “Novice” Housewife? Going on further to explain that from the pictures and the food I make, it didn’t look like I was a novice.

At that time I took it as a compliment and smiled (reminding myself that when someone pays you a compliment you should always accept it and never protest).

In my mind though, I was saying- of course I am a novice, there is so much I do not know.

How little I know. And how much I need to learn.

(I know this doesn’t sound like a strong case for me giving my “expert” advice on Indian food at GMT!   Yikes!   Anywho….)

The other day, I downloaded a food recipe app- a Nita Mehta iPhone app.

Nita Mehta is like the Ina Garten of Indian food, if I could say so, without offending fans of either of the mentioned parties. Her recipes are quick and mostly great. Like Ina’s.

So anyway, I downloaded the app- its a breakfast recipes app. And looked good. I decided to try her version of Rajasthani Chilla.

Traditionally a chilla (pronounced as chee-la) is made with besan (chickpea flour) and spices, which I have made before and its safe to say I love them. But her version was with split green beans and that intrigued me.

Now I have never known my pulses. Well at least by their actual names.

Whole black gram was (and still is) referred as “maa ki dal” or “kaali dal” (“kaali” is what we call black in hindi).

My level of intelligence and association has no bounds!

So, when I read split green bean – I somehow knew it was moong dal- but the “split” and the “green” had me confused.

I had, in my kitchen, three kinds of dal that fit the “moong” description.

One was this. Whole Green Moong Bean/ whole green gram.

The other this. Split green gram/ split green moong bean.

And the third one was this. Split and husked green gram/ dhooli moong dal

Now, when I started out to make the recipe, I started with the first kind. Three hours of soaking time later, it struck me that the recipe called for split and this is whole green gram. So, I decided to use the whole bean for sprouts and make the chillas the next day.

(The bean sprouts contains vitamin C, not found in the dry bean. What would you know I accidentally was forced to make something to beat the cold virus this season. God IS on my side!)

Now, luckily (or so I thought) I had split green gram in my pantry (my mom had got it when she came few months back). Just to be sure I had the right thing this time, I did a quick google image search. And this is what I got.

Even though all the three varieties are shown in the search, I somehow assumed the second picture top row was the one Nita Mehta was talking about- well, since it was green and split. So, I used the split green beans my mom got.

And set out to make the recipe on a lazy Sunday morning. For brunch.

V and I loved the chillas. I just loved them for the fact that they were so healthy. Being tasty, of course, helped.

Everything was great. So I knew I could use it for GMT.

I started getting excited about sharing this healthy recipe with you.

All was merry in my part of the world.

And then while writing this post today, like I always do before writing my GMT posts, I researched a bit on the Rajasthani chillas- to find a little history.

And then it struck, after checking the recipe again. The recipe called for dhooli (washed) green mung bean. Or in english, split and husked green gram (which is not green in color but yellow!). And I had used split green gram- the not husked, green kinds.

Now, split green gram is split and green in colour, whereas split and husked green gram (or dhooli mung dal) is split and yellow in color (why do they still have to call it green is beyond me!). And that is why all the recipes had yellow coloured pancakes/chillas.

Yes, that’s why I am novice.

A know-it-all would never make this mistake.

I had drafted a whole post on Rajasthani food and the Rajasthani Chilla and why this recipe does not have ginger-garlic and onion in it, only to find out I had got it all wrong!

Yup, I make mistakes too.

Some good. Some not so good.

Luckily, this was a good mistake.

To be fair, the recipe did mention split green beans and that’s what I used. Of course I ignored the part where it also mentioned in parentheses dhuli moong dal, indicating the yellow moong dal. If I was american, I would have been correct in using what I did. Now, only if I was american…..

Whatever the case be, and whatever part of the world I belong to, these pancakes/chillas were good. And well, its the same pulse anyway- just not husked.

I have always considered breakfast as the most important part of my morning ritual. The split (unhusked) moong dal did make wholesome and toothsome savory green pancakes and with a nice green mint chutney to accompany it, it was a perfect way to start the day healthy! 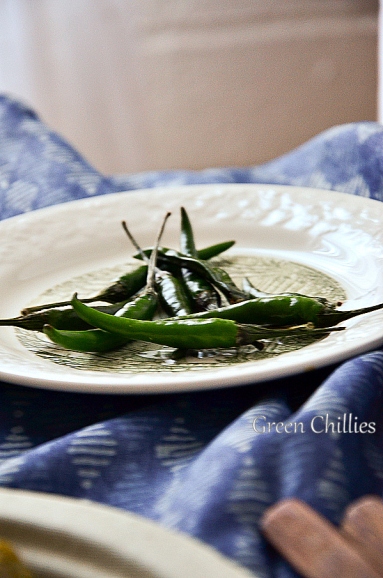 The batter keeps well in the refrigerator for several days, and it’s a great anytime meal, especially for children who refuse to take their lentils any other way.

In case you do not have mint chutney on hand, you could also eat it with a spicy pickle, or ketchup or spicy salsa.

And for the filling, along with the Indian cottage cheese, you could also add onions, tomatoes in it. The reason why I did not add onions/garlic/ginger was that when I thought of making them I decided to do a Rajasthan centric post and since most of the native Rajasthani people are followers of Jainism and do not eat root vegetables, so using the above would not have made the recipe authentic. Of course, you should feel free to improvise.

These are a great gluten-free alternative to normal pancakes. You can veganise the recipe by substituting the paneer with tofu. 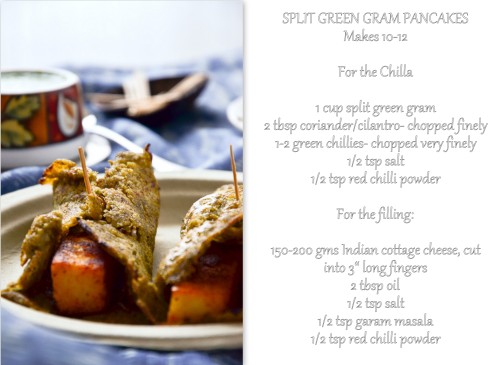