Sky High Cake Only for Two 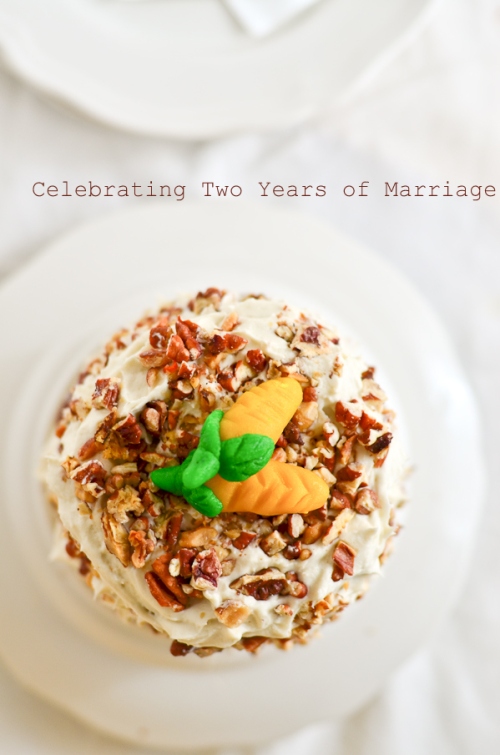 Last week, we were in tank tops, complaining that its already getting so hot.

Today is also our wedding anniversary!

Two years back, this day V and I entered into the “joys” of holy matrimony! We both took a leap of faith two years back, today.And then again tomorrow. (If you are confused, this post might help to clear your confusion)

I will be honest, things were not easy initially. An arranged marriage, completely new place, and thousands of miles away from my friends and family- people are right when they say the first year of marriage is always the toughest. It was tough for me and I am sure even for V. But we stuck through and today are celebrating our second year of togetherness! Hopefully there will be many more to come! 🙂 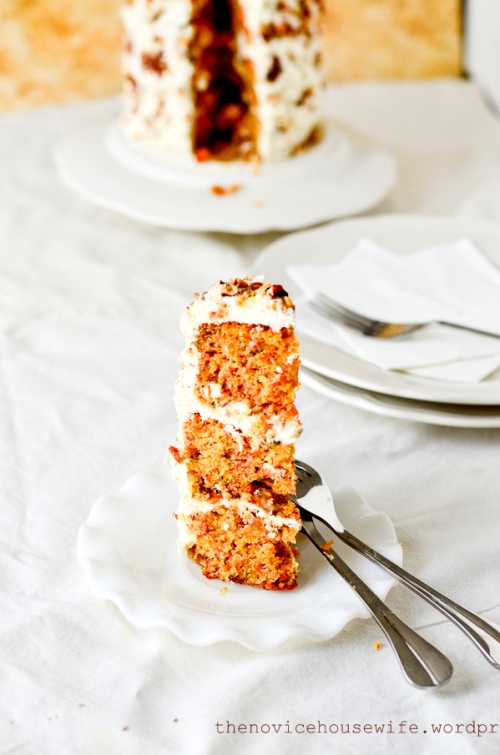 Last year for our first anniversary, we were not together. I was in India and V was in US. There were no gift exchanges, no hugs, no kisses, just a phone call.

This year thankfully we were with each other.

Had lunch at home together and went out for dinner in the evening.

The snowfall, and the clouds on the drive made the whole day even more romantically special.

V gifted me an ice cream maker, something that I have wanted for a long time, and am so excited to use. Before you all gush and say how sweet, (or the feminists among you say how dare he give you a kitchen slave tool), I am getting him the new iPad. It might not seem a fair deal (of course, skewed towards V), but the iPad is his anniversary plus early birthday gift. Since I am not earning, and its through my savings that I am buying the gift, he just gets one big gift for both his special days.

And yes, he gets a cake too.

I had no problem deciding what cake I wanted to make. V loooooves carrot cake.

If I remember correctly, it was the first cake I baked for him after marriage. And he absolutely loved it.

V hardly used to eat cakes before marriage, something that has for surely changed in the last two years. There are many times he has come to me and told me that he is craving for something sweet, preferably a cake. His diplomatic and “too-sweet-to-bother-someone-else” self will never tell me to bake one, but generally when such feelings are shared, I bake one anyway.

Today, no such feeling were shared (maybe because he knew I would bake a cake either way and he was right). It is our anniversary and a cake had to be there to celebrate it.

Now, I have seen carrot cake recipes with crushed pineapple and coconut, and one with chopped apples too, all of which I am tempted to try. But I thought to stick to my plain carrot cake recipe, the one that V loves. He is not used to changes in his food, and I had my doubts that he might not welcome the variations. Since I was making the cake more for him than me, I am leaving my experiments for another day.

If you remember, one of my New Year resolutions was to make more layer cakes.

If you have been keeping track, there has only been one layer cake that I have made this year (the repeat of the lemon lavender cake).

The thing with layer cakes is you need a special occasion to actually make one. And you need a lot of people to help you finish it.At home, it’s just V and me. Most of the baked goods I make, I send to V’s office, but I am yet to figure out a good way to send layer cakes to V’s office. Plus, I think it would be silly to bake a layer cake for no occasion and sillier still to send it to V’s office and announce to the whole world how silly I am to make a layer cake just for fun! I mean that’s just too much of enthusiasm. Even for me.

Even for special occasions, like my birthday or anniversary, baking a layer cake just seems too much. I mean 3 cakes, slathered with frosting sound good, but then what do you do with all the left overs. My friends are all trying to lose/maintain weight and they don’t want cake near them. Nor do I. As a result, there have been no layer cakes.

But, I really wanted to make a layer cake.

After racking my brain a little, I figured why not make a smaller layer cake instead of a 9-inch layer cake. Since the only cake pans I have are 9-inch in diameter, I thought of baking one 9-inch cake, and cutting out circles from that, and using those smaller cake circles as layers. I am still making just one cake, and using that to make a layer cake. Absolute stroke of genius, I tell you! (I am sure people have done it before, but let me be happy that I am the only genius person to think of it!)

I baked the cake, and then realized I do not have any cutters for the dimension I liked. I found that the lid of a protein mix box was perfect to cut out three 4 inch layers from the 9-inch cake (yes, I can be quick on my feet, sometimes). Placing the lid on top, and using a serrated knife, I cut out a 4 inch circle. The same way, I cut out two more cake circles. And there I had three 4 inch cake layers.

I did manage to stack it up and it stayed till I cut it, but I was nervous that it would fall anytime, since the base was really small for the height of the cake. Next time, I’ll probably cut out two 4.5 inch circles, and cut each layer horizontally, to get four smaller (in height) 4.5 inch cakes.

On second thoughts, the sky high cake did look great once cut.

Note: I used 4 really large carrots, instead of 4-5 medium carrots. After grating, the carrots weighed about 340 gms. It did seem like a lot, but it really isn’t. The cake is moist and not too sweet. Since the cake isn’t overtly sweet, do  keep that in mind when you make the frosting. If you would like it more sweet, use 75gms (or even more) of icing sugar in the frosting, else use 50 gms.

There will be some cake left after cutting out the circles, you can always use the leftover cake to make cake truffles, or just eat it as is!

Make sure the cake is completely cool before cutting it. I have found a 4 inch lid perfect to trace and cut out 3 circles from the 9 inch carrot cake, as shown in the picture below.

17 Comments to “Sky High Cake Only for Two”