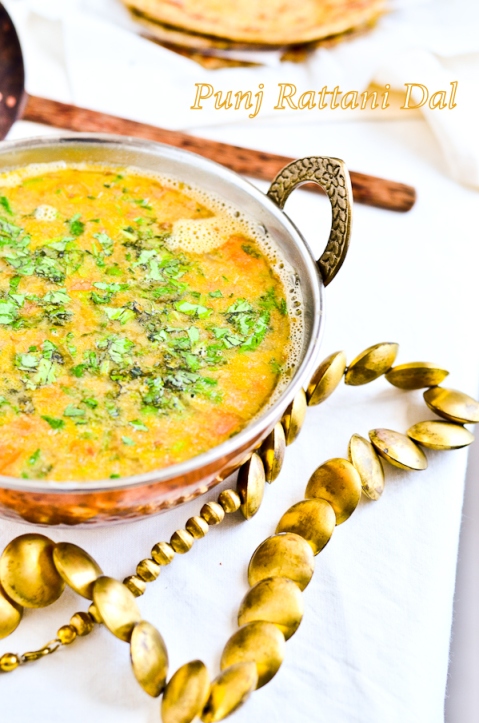 Dals are an integral part of Indian meals. In some form or the other, they are eaten daily in almost every Indian home.

Dals- lentils or pulses- are varieties of dried beans and peas. They are the main source of proteins for the average vegetarian Indian. Although dal generally refers to split pulses, in actuality there are two types of dal. Whole pulses are known as sabūt dal and split pulses as dhuli dal. The hulling of a pulse is intended to improve digestibility and palatability, but as with milling of whole grains into refined grains, this affects the nutrition provided by the dish, reducing dietary fiber content

Each state in India cooks its dal in different ways.  In south, dal is mostly eaten in the form of sambhar. People of Uttar Pradesh swear by toovar dal which is tempered with asafoetida, cumin seeds and sometimes garlic. Punjabis love their dal whole and unhulled, in the form of the delicious dal makhani, or rajma to accompany their rice or chole with their bhaturas.

When I have to describe dal to people in America who haven’t eaten it, the easiest way is to give them a picture of a lentil soup, although dal is a far cry from just a simple soup. The dal that we have is not as watery as soup, generally being creamier (without necessarily adding cream). A well cooked dal is generally quite thick, but sometimes just to keep it light, people thin it down a bit, such being the case for some of the dals that are cooked in southern India.

The tadka or the tempering is what gives a dal its distinct flavor, and is probably what distinguishes it from soups.

Tempering involves heating oil/ ghee in a small pan, to which whole spices are added, which in turn is poured over the cooked dal. Tempering can be simple with a little asafoetida and cumin seeds being tempered in some ghee/or oil, and then mixed in with the cooked dal. Or it can be elaborate by tempering some onions, ginger, garlic and tomatoes in ghee/oil, before adding to the cooked dal. 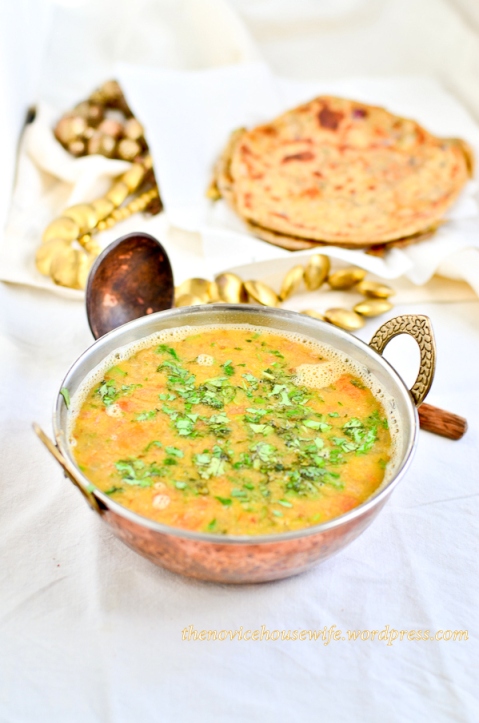 As I mentioned before, most Indian homes have dal in some form or the other every day. At my parents house as well as V’s parents’ house, there is a dal, a side dish of vegetable and roti/ or rice for every meal. In V’s house they serve both rice and roti with the dal and vegetable side dish. At my parents’ house we since we are not too big on rice, more often than not we have our dal with roti (Indian flatbread) and sabzi (vegetables).

The dish that I am sharing today, is one that my mother often makes when she has guests over- Punj Rattani Dal. Its not that it is an elaborate dish, and that is why its made only during parties, but since it requires some planning ahead, it can not be regularly made in our house. Though whenever it is made, it is appreciated a lot. I absolutely love this dal.

Punj Rattani Dal (sometimes referred as Panchrattan Dal) is a dish made by cooking five different lentils in a delicately spiced onion tomato base. Rattan means jewels and Punj/Panch is what we call five in India. Loosely translated it means a “five jewel” lentil dish. The five jewels are toovar dal, moong dal, masoor dal, urad dal and chana dal.

It is a very simple dish to make, although the prep and cooking time is a lot, more so if you do not have a pressure cooker. Since the recipe calls for whole lentils rather than hulled/or split, to make sure that lentils are tender after being cooked, it is important to pre-soak them for an hour. Also the unhulled lentils make this dish a high fibre, high protein dish.

My mother has made this dal several times. The recipe she uses comes from Jiggs Kalra’s Cookbook

My parents gifted me this book when they came to visit me last year. They absolutely swear by this book, and rightly so. Although the format of the book is not the best, with a very poor quality printing, all the recipes that I, or my parents have tried have come out consistently delicious. Layout issues aside, the recipes in this book are spot on, and if you are looking for a good Indian cookbook, I would highly recommend it.

I do realize that most of you won’t have the necessary legumes required for this dal, but that’s ok. You can always beg, borrow or steal the required lentils from your Indian friends. And in case you don’t have any Indian friends, then this dal is the perfect excuse to make some!

I always have had issues with recognizing different lentils. Initially I would google every lentil used in a recipe, to be sure that I was using the right stuff. Now, most of the times I can do just fine without the help of my friend google.

I have tried to explain and give a picture of the different lentils used in this dish, in the hope that you too would not require the help of your friend google. 🙂

Also called yellow pigeon peas (and arhar), they are available either plain or oily. I buy the plain ones. Toovar dal is slightly large than chana dal and often with irregular edges. I have a crockpot recipe using toovar dal that I love. Do check it out. 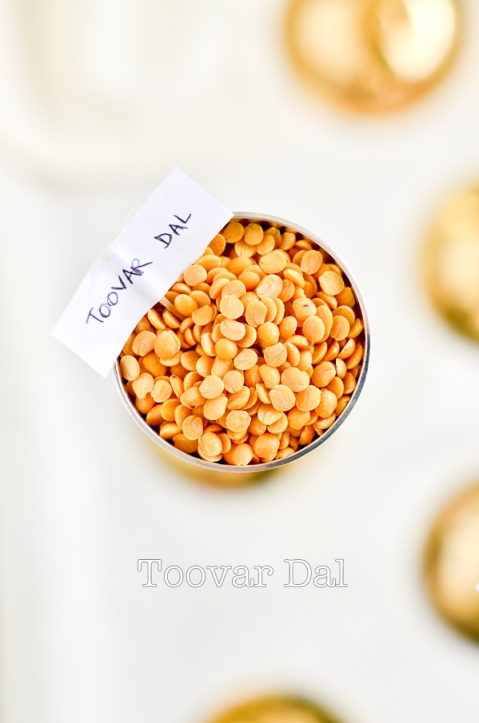 They are small, egg-shaped, and green in colour. Mung beans are light yellow in colour when their skins are removed. But we will be using the whole version, that is the green colored lentils in this dish. The whole moong dal is called mung beans in health food stores. Check this out to clear the confusion between different moongs available.

When whole, this bean is brown. Not to be confused with their hulled/skinned version that is salmon in colour.

With their sweet and nutty flavor, these are the most popular dal in India. They’re made from splitting a small relative of the chickpea in half.  They’re a dull yellow and are renown for causing flatulence, which Indians try to counter by adding asafoetida to the dish. 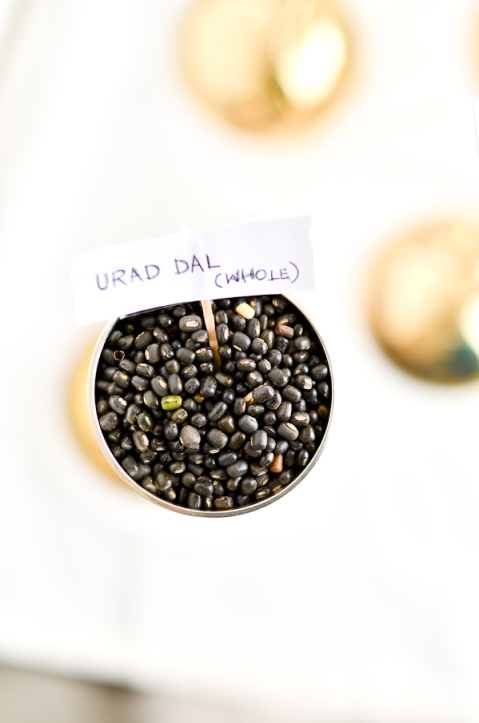 The consistency of this dal is on the thicker side, even though in my photographs it doesn’t show so (I had to remove the dal to take photographs before the sun went- the pains we take for blogging!) These lentils are cooked into a very soft, somewhat smooth and creamy texture, having  just the right balance of spice. I generally add a dash of lemon juice to this dish and suggest that you too try it once like that.

The original recipe calls for a higher amount of fat than I use. But if you are feeling a little indulgent, increase the ghee called for in the dish. I am sure you won’t regret it (well, as far as taste goes, you won’t regret it. Can’t say the same for your waistlines!)

2 tbsp butter (if you have access use white butter) 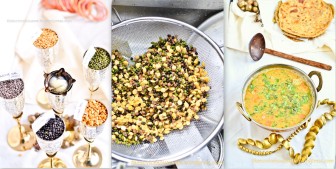