May the odds be ever in your favor!

So, I finally got to see The Hunger Games Movie. After waiting out the weekend for my gang of girls to get back from their spring break vacation so that we could all watch it together, we finally went for the movie yesterday.

And well, I am not sure how I want to react to the movie. I liked it. But, as much as the book? No way.

I do understand that fitting 384 pages in a two hour twenty two minutes movie is a task and while Gary Ross has done a good job bringing Suzanne Collins’ book to the big screen, I somehow feel, had I not read the books I would be a little lost during the movie. Knowing the entire back story was a definite advantage. There were lot of instances, where had I not read the book, I would have been totally confused as to what just happened. Also, I remember rooting for Peeta and Katniss’ love story, but in the movie the chemistry between them left me indifferent to the idea of the two together. If only left to the movie, I would have been on Team Gale for sure.

Since the people I went with had read the books, we knew the back story well, but I would really like to know what the people who haven’t read the book thought about the movie. Do feel free to comment here.

Anyway, coming to today’s post. I won’t be posting on GMT today. Why? Because, it’s that day of the month again. The Daring Bakers’ Challenge Day!

Well, I love making bread at home. The smell of yeast while it’s magically turning a dense mass of dough to become a well-risen loaf of bread is heavenly. Many a times, once the dough has risen and I have punched it down (and before baking), I take it to V to make him sniff the delicious yeasty bread. He, of course, does not feel as passionately about the bread as I do, but he humors me anyway.

And since I love making bread in all shapes and sizes, this month’s challenge got me very excited.

I have never heard, eaten or seen a Dutch Crunch bread. So it was quite a challenge and even though I have nothing to compare to, I liked the results. And I feel it looks quite impressive as well!

Technically, Dutch Crunch doesn’t refer to the type of bread, but rather the topping that is spread over the bread before baking. The paste dries and cracks during the baking process. The rice paste crust also gives the bread a distinctive flavor. The final result is a crusty exterior, but a soft inside, making it perfect for a sandwich roll.

In different regions the bread is known differently.

In Dutch it’s called Tijgerbrood or “tiger bread” after the tiger-like shell on the bread when it comes out of the oven. (Mine doesn’t look like a tiger shell, more of turtle shell- and since we are talking about turtle check out Bourbannatrix’s post).

On 31 January 2012, the UK grocery chain Sainsbury’s renamed the product “giraffe bread” after a letter written by a three-year-old named Lily Robinson, suggesting the alternative name, went viral. Sainsbury’s stated that “In response to overwhelming customer feedback that our tiger bread has more resemblance to a giraffe, from today we will be changing our tiger bread to giraffe bread”.

Until recently, Dutch crunch was largely unknown outside of the Bay Area, California and the Netherlands, but the rest of the world is starting to catch on. And thanks to Daring Bakers’ the word is spreading.

Food historians have speculated that the idea of coating bread with a rice paste may have originated with Dutch traders traveling to Indonesia in the early seventeenth century. You can read more about all that here.

The second part of the challenge was to use the homemade Tijgerbrood/dutch crunch bread in a sandwich.

I decided to fill mine with all of the following:

Yup, that was a pretty mean sandwich and it was our Anniversary lunch along with the carrot cake. And I am glad I chose it as part of a meal on our special day.

I would definitely ask you all to try this bread. It will get a lot of ooh’s and aah’s and you will be gastronomically satisfied as well! 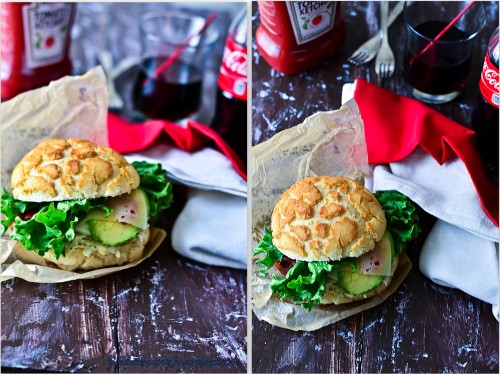 As always Audax was forthcoming with his advice and this helped me while making and prepping the bread. Some of them I followed this time, the others I will follow next time. Do check out his blog post, it has a detailed version of the following points.

A Note about Rice Flour: Be sure not to buy the sweet or glutinous variety, but you can use either white or brown rice flour as it works just fine. A link to homemade rice flour was given in the challenge, although personally I can’t vouch for it, since I used store bought.

Storage & Freezing Instructions/Tips:
Store as you would any bread – in a bread box, a paper bag, or loose plastic wrap. Both varieties suggested are best in the first couple of days. The loaves or rolls can also be frozen in plastic – simply toast to reheat.

Click on the images for a bigger view of the recipe.