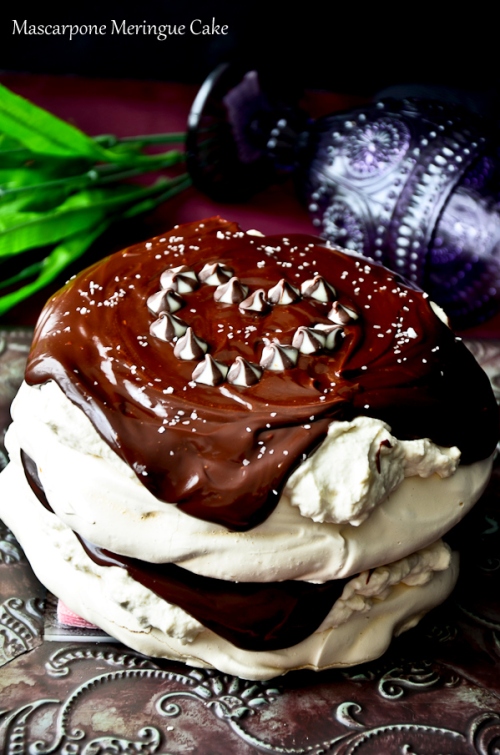 I haven’t been feeling too motivated to blog. I really don’t know why. Just in that rut, I guess- the bloggers’ block. This blog was supposed to be about food as well as my life with snippets from my day to day life. You know, so that one day, when I or my kids or someone would read and say hmm so this was the day The Novice Housewife did this.

And, although things are happening in my life, there has been nothing worth writing about. And, even though I have plenty of recipes to share, I haven’t been blogging because I just don’t know what to write.

But today I can’t let my rut come in the way of sharing this recipe with you. Especially, more so because Valentine’s days is in two days.

And though I am not a Velentine’s Day celebrator, in case you are, you will have to make this.

Or not. And eat it all by yourself.

END_OF_DOCUMENT_TOKEN_TO_BE_REPLACED

Anything that can possibly go wrong, does!

Well, earlier it was just a feeling but after today, I am positive that I am jinxed.  Seriously, there’s no other explanation for what happened today or actually what happens every time there is something important.

I have been using my kitchen for the past one year without ever encountering any problem. Everything has always worked out smoothly. Everything was working smoothly even yesterday.But the day before I am going to have 9 people (make that 11 including me and Vikram), not only do I have a sprained ankle to deal with (which makes it difficult for me to stand for more then 10 minutes at stretch), a dog to sit for, lunch and dinner to cook for 11 people, besides cleaning and getting the house ready for them, but amidst all this I also land myself a broken stove.

Well actually it did not break, but at the time it sure seemed to me that it did. Our kitchen’s power got cut off and that’s why none of the appliances in the kitchen were working- including the refrigerator- which shutting off in this heat is a disaster in making. To top it all, our housing people could not do anything as it was a problem with the city’s lines- some problem with their transformer. And just when I thought things could get no worse, the whole house’s power decides to go. Now this kind of stuff happens in India and had I been there I wouldn’t be like Why me!Why me! But…. 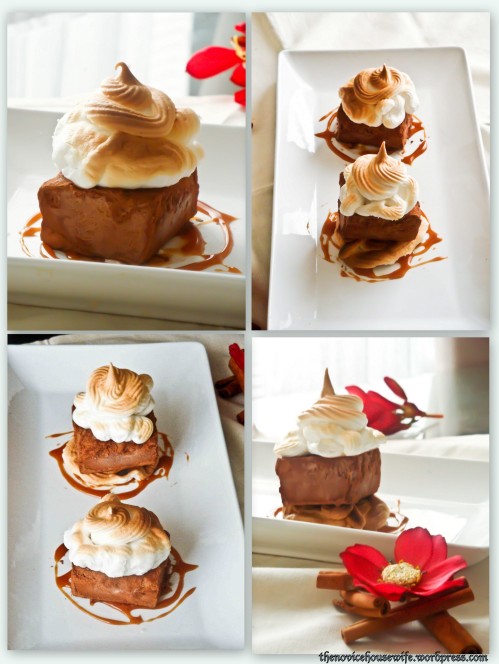 …But this is America and the power never goes off here! So yes, you can’t blame me to think that I am jinxed. Seriously there is no other explanation. And trouble doesn’t happen to me in single folds- I was ok with the dog sitting- I love dogs, so it wasn’t any trouble for me. I was also ok with the sprained ankle- it hurts but its manageable- I would probably get it checked if it doesn’t improve. But, no way am I ok with no power in the kitchen. That’s too much for me deal with when I have so many people coming to my house. Two days before the least of my worries was how are we going to manage with one bathroom for 11 people and today I just couldn’t stop counting my problems.

Anyway, such is my life! Things got on track after a few hours of turmoil. I am late again for posting this month’s Daring Bakers’ Challenge (though I had almost finished writing about the challenge yesterday and would have posted it had things gone more smoothly). Out of three challenges that I have completed, two have been posted late! I am one of the worst members ever! But each time I had valid reasons. Once I was traveling and this time, well you all know the story! The fact that I was able to complete this month’s Daring Baker’s challenge is good enough for me. And am so glad I did. V loved it. In his exact words: “I like this DB thing you have got going. I get to eat such wonderful things – names of which I have never even heard before!”

The May 2011 Daring Bakers’ challenge was hosted by Emma of CookCraftGrow and Jenny of Purple House Dirt. They chose to challenge everyone to make a Chocolate Marquise. The inspiration for this recipe comes from a dessert they prepared at a restaurant in Seattle. 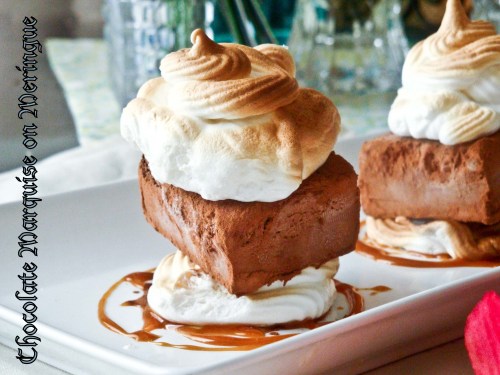 The compulsory components for this challenge were the Marquise and the meringue. The tequila caramel and spiced nuts were optional. While I could do the caramel (thank god I did because it tastes great!), I did not have time nor the energy to make the spiced almonds as well. I left the challenge for the last minute as I could not find dutch-processed cocoa any where, and finally used normal cocoa- which according to me worked out fine, though I have nothing to compare it to. Plus, I had too much on my cards to complete each optional component. But I will be trying this dessert again and will be trying all the components to make it the outrageously decadent dessert its supposed to be. 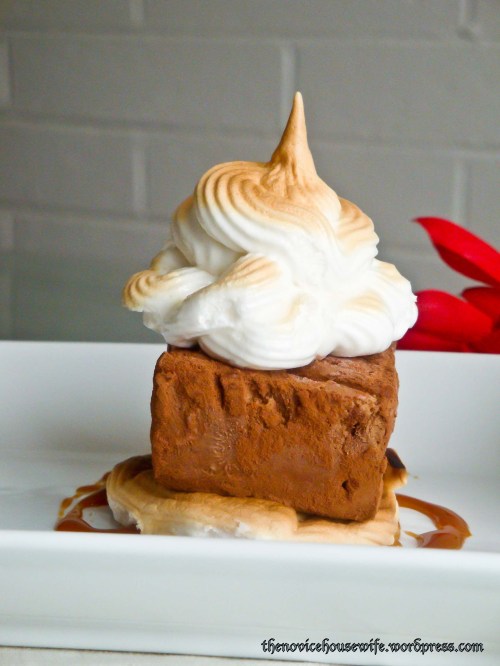 Note: I have given the ingredients for half and quarter recipe as well which were given to us by by Audax Artifex. I made only a quarter of the recipe. END_OF_DOCUMENT_TOKEN_TO_BE_REPLACED

I have been so lazy the past few days- jet lag, catching up with my mom on family gossip, and just the sheer comfort of home where I don’t have to lift a finger for anything (seriously! there’s someone to cook, someone to clean the house, someone to do the laundry) – all of it has made me lazy to blog. The first few days back home, I did nothing- yes, jet lag was a primary reason- with the odd sleeping and waking hours – I was busy orienting myself to the change in time zones.

Thanks to the jet lag, though, I have been regular with my exercise. Up at 3.30 am , I was ready to exercise at 5 as there was nothing else to do. Now, of course the jetlag has more or less worn off, but I still sleep pretty early and am up at an hour which has always been a little early for me, but a good time for me to hit the gym. Since the day I arrived, my mom has been pointing out how much weight I have gained, and this just won’t do. So, I have been working hard and hope to continue doing so. I also resisted buying Nutties, a chocolate I haven’t eaten for over a year and which has always been one of my favorites. I also passed the opportunity for picking a packet of Bingo (a very popular chips packet in India), something that was a staple during my B-school days. Determination! Well, I really do need to get in shape! 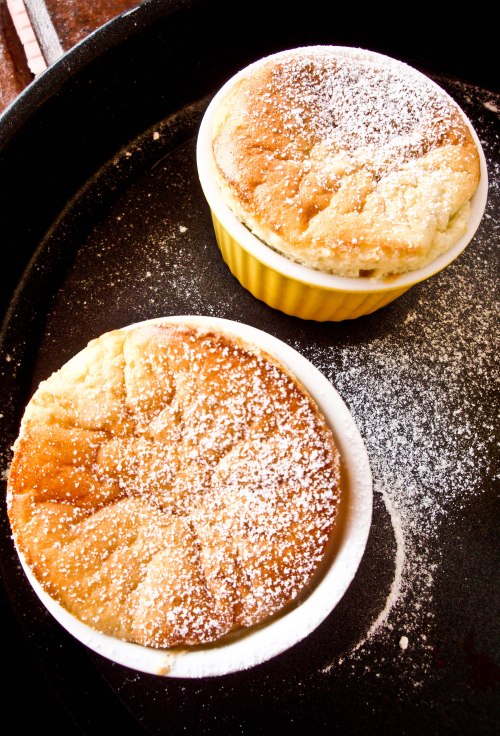 I did indulge in a soufflé though. Well, a little leeway is allowed. The thing is- I had to make the soufflé. I had tried making one day before (a spicy dark chocolate one) but it was an utter failure. Mind you, when I made it the first time, I only made enough for my mom and dad and none for me- again determination! And what would you know, that was a flop, and one of the reasons for its failure was that I overfilled the ramekins, trying to avoid filling a third one for me!

I could have written about the other reasons for failing at soufflé making, but decided against sheltering under excuses, because I believe a good baker should be able to turn any kitchen environment to his/her advantage. So the next attempt had to be made to prove that I can bake not only at my own house (where I have the luxury of a big oven, the perfect temperature, the right temperature and ingredients) but just about anywhere! 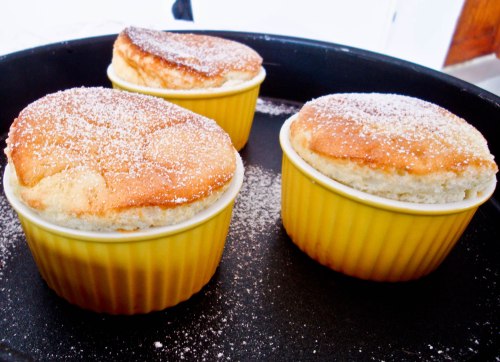 So, I set off to make another soufflé yesterday. All soufflés are made by folding stiffly whipped egg whites into a richly seasoned base, either sweet or savoury, then baking until risen and feather-light. In my last attempt I tried Curtis Stone’s recipe which only uses egg whites and no yolks/cream/milk/flour/butter. This time I decided to try a version which started with a base of roux and lavender-lemon flavored cream folded into the egg whites.

Preparing the dish, some claim, enhances the chances of having a perfectly risen soufflé. Since rising wasn’t a problem in my first attempt, I decided to use Curtis Stone’s way of buttering and sugaring (is that a word?!) the ramekins. He adds melted butter to the bottom of the ramekins and with a brush and upward strokes, butters the sides of the ramekins. Then, he lets the buttered ramekins sit to cool in the refrigerator for 2-3 minutes. Once the butter hardens, he again brushes the sides with melted butter and sprinkles granulated sugar on the bottom and sides of the ramekins. (You can check the video here)

When I told one of my friends of my plans to make a Lavender soufflé, she called me lavender obsessed. As much as I don’t like to admit, but lately I have been on a lavender fetish. I just love the flavor lavender adds to any dish. And, well, lavender with lemon- that is what delish stuff is made of!

Attempt two at soufflés turned out not so bad. I did have one with a cracked top, but the other three rose just fine and behaved themselves for me to take a few pictures with their puffed tops (although, they did sink a bit by the time I got them ready for the shot).

END_OF_DOCUMENT_TOKEN_TO_BE_REPLACED 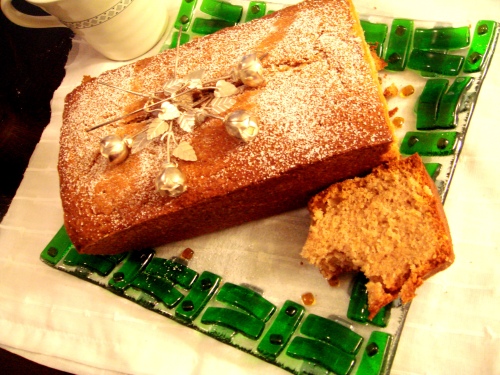 Generally a lot of recipes call for just egg yolks, and, as a result, you are left with too many egg whites on your hand. Scrambled eggs, egg white omelet, macaroons, meringues can be useful ways to use those left-over egg whites. Or, if you are the beauty-savvy kinds, you can use the egg whites as a rinse for your hair (you’ll smell of egg after that- but it conditions your hair like anything). High in protein and negligible in fat, its a good way to enjoy the benefits of egg and not add to the cholesterol levels in your body.

I had made custard the other day, and was left with the dilemma of how to use the left-over whites. I decided to make the White Spice Pound Cake from Rose Beranbaum’s The Cake Bible. The cake is soft and velvety and even though there are no egg yolks, the addition of cinnamon, cloves and brandy gives it a really rich flavor. I added nutmeg too, though the original recipe doesn’t ask for it.