When I was young, every Christmas, one of my mom’s friends, would gift us a loaf of fruitcake. It was the most delicious cake I have ever had. Growing up, I experimented tasting other fruitcakes, but nothing ever came close to that cake and well, the other fruitcakes just put me off fruitcakes altogether. This Christmas I wanted to recreate the same recipe. I tried asking my mom to get the recipe from her friend, but, unfortunately she did not have her number. One thing my mom did know about the recipe, though, was that she would make it at least a month before Christmas, soaking the cake with booze every few days.

So, the Monday after Thanksgiving weekend, I started prep for my version of fruitcake. One thing I was sure that I did not want to use in the cake, was candied fruit. I was so sure about that, that even before searching for an apt recipe, I had already bought dried fruits. So I looked into my cookbooks, but none carried the recipe that made the cut. Then , I turned to my next best friend, google, for the recipe. And I found Alton Brown’s. Now, I loooooove his series Good Eats and the recipe is from one of the episodes of the series that aired this recipe. Besides not including any candied fruits, the recipe also got rave reviews. I did tweak it a bit by including the dried fruits I bought. My list included black figs, calmyrna figs, dried currants, medjool dates, dried cranberries, crystallized ginger, monukka raisins, pitted prunes, sultanas. I used brandy instead of rum as thats what I had on hand. Since, I planned to gift the cakes to a few of my friends, I tripled the recipe.

The dried fruits chopped up and covered in sugar

I have never baked so many cakes together at one time before. And, there was this nagging feeling telling me- this is not a good idea. I did not have a bowl big enough to mix the whole batter. Then the oven wasn’t so big to accommodate all the cakes and having enough space for air circulation. Anyways, I thought to myself, if they are an utter failure- well, I’ll keep them for myself and make a pudding!

Three weeks later, they are all wrapped and ready to be gifted to friends, save for one- the one for us. Now, of course, I don’t remember the taste of the fruitcake I had eons back, but this version has been the best I have eaten since then! 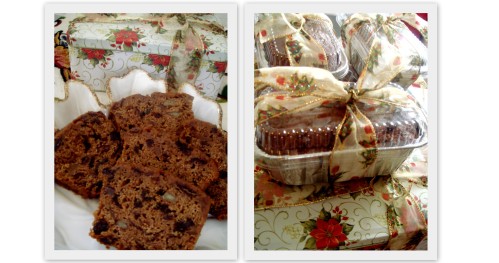 Alton Brown likes to have his slice toasted with some mascarpone cheese! Like Alton Brown says, this is Good Eats!