To those who are wondering, Yes! I am still alive.

Not that I have been super busy, and not that I haven’t been cooking, it’s just that with in-laws in town I have not been able to do my blog routine of cooking and then photographing and only then eating the food. Hence, the silence and the absence.

And since I had this kind of forced break from blogging, I thought of giving the internet or more like the social media a rest as well. I went close to two weeks without checking my mails (it was difficult but I survived!). While I was at it, I deactivated my facebook and whatsapp accounts, cutting myself from the world, with only the telephone as the way to be in touch. I felt like I had gone back to the stone age. And, honestly, it didn’t feel too bad. And, it brought about a peace that I needed. It was my way of zen.

But then, I started missing the photos my sister-in-law used to send of my 5 month old niece on whatsapp. I also managed to scare one of my friends into thinking I had done something to myself or met with an accident since I had not replied to any of her mails and was off facebook too. (Is it sad that she was the only person concerned?) So, I decided to get back on.

Now I am back to checking my mails and am back on whatsapp. Somehow I did not miss facebook too much and am still off it. It’s actually liberating to be off facebook. Sometimes peer pressure on it is just too much for me to handle!

Anyway, since I had thought of taking time off the blog, I asked Nick from Frugal Feeding to guest post for me. For sometime I was playing with the idea of getting a non-Indian to guest post for Garam Masala Tuesdays. And, Nick was the first person that came to my mind. I know he cooks and likes Indian food. Besides, I just love his blog’s concept of making good food that doesn’t cost the earth. I also knew that whatever dish came out of his kitchen would rank high in the looks and taste department, so I knew I was giving the reins to the right person.

Of course being British, he had to one up me (the Indian) with all the big words in the post. Being used to my posts, I am sure you will welcome the level of smartness that Nick brings today. And I hope that Nick’s Chickpea and spinach curry is that little nudge you needed to start cooking Indian at home. It sure makes me want to cook the dish right away! 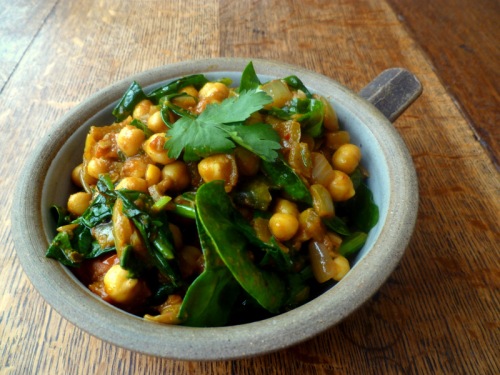 Having been a member of the cult of food bloggery for a little more than a year it is somewhat surprising that this is only my second guest post. Indeed, as one may be able to discern, it takes a truly monumental offer to coax this hermit out of his crustaceous layer and write such a thing. Conversely, in spite of my general lack of willing for guest posting, this is my second in as many weeks. For when Shumaila suggested that I provide her readers with the culinary perspective of a non-Indian, it was impossible to pass up the opportunity. As such, the recipe found below won’t be too fancy and shan’t attempt to match the ingredients or style employed by my host. Instead, it shall seek to epitomise the sort of curry I cook on a weekly basis; it must be fairly healthy, not sit too heavily on one’s stomach and it must be jolly well packed full of flavour.

I’m a firm believer in a simple list of ingredients being enough to deliver a wonderful body of flavour. Though, of course, there’s nothing wrong with a more complex list, as long as each component is melded together appropriately. I suppose that’s the difference between Indian and non-Indian curries; the former tend to be slightly more complex, since their creators have grown up around the culture and cuisine which has, in turn, shaped their understanding of it. Indeed, British food is well known for being relatively simple and it is rather fitting that such an attribute should rub off on this dish.

Though it will be extraordinarily difficult to fill the shoes of my host, an experience Indian cook, I do hope that you’re pleasantly surprised by both the look and taste of my simply delicious curry.

Cost: Curry is the sort of dish that brings an awful lot of flavour at a relatively small cost. This value for money is amplified by the fact this curry contains no meat, but pulses and leaves in its place. As such, this entire curry should set one back no more than 80-90p. A delicious bargain!