For the month of February, Christianna of the Burwell General Store chose a wild rice dressing as the recipe to be swapped.

The rules of the swap are simple. Each month Christianna sends us a recipe from a vintage cookbook, to which we have to give our own twist by changing at least three things either in the recipe’s ingredients, or technique or both. 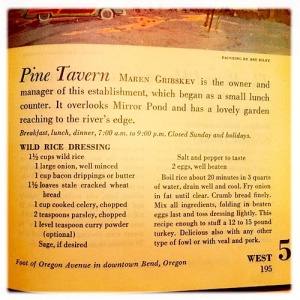 I have never worked with wild rice before. But for this swap I found out a little about it and it turns out wild rice is actually not a member of the rice family. This article is an interesting read about wild rice.

From the moment I saw the recipe I was inspired to go the sweet way for it ( no wonder I have weight issues!). I don’t know why, but rice pudding kept haunting me. I rummaged through a few of my cookbooks and found a recipe for wild rice pudding with cranberries in Classic Home Desserts by Richard Sax

. It sounded great and I was so excited to try a version of rice pudding that used wild rice.

Even though I am quite sure wild rice is not available in our local grocery store, I still will admit that even if it was, it completely slipped from my mind to look for wild rice each time I visited the store. And since I was in no mood to make the trip especially for it again, I decided to try the Indian version of rice pudding called phirni- one of the few Indian desserts I love.

But there was another hiccup to my plans. I realised I did not have enough milk for it (yes this was after a grocery trip- I seriously need to look at managing pantry supplies!)

had a recipe for a rice pie, which Richard Sax called the best recipe in the book. I have never had or even heard of a rice pie. I was intrigued. The recipe can be successfully halved but since it was just V and me eating, I quartered the recipe. I still had more filling than required for the pie so I mixed some cardamom and cinnamon to the leftover filling and kept it on low flame for 30 min, and served it in individual bowls. It was rich, but tasty. The same holds for the rice pie.

Richard Sax calls it one the best recipes in his book Classic Home Desserts. Generally baked ina  rectangular pan , it is a sturdy dessert that travels well. The recipe is from Mary Codola of Rhode Island, who has been baking it for her family at Easter for many years.

The taste is quite similar to custard and even though I am not a fan of custard, this wasn’t that bad actually. In fact it was pretty good. It is quite heavy though and a few spoons will fill you up! I would suggest small servings of this.

(I have listed the original recipe)

Do check out what the other talented Recipe Swappers have come up this Swap: