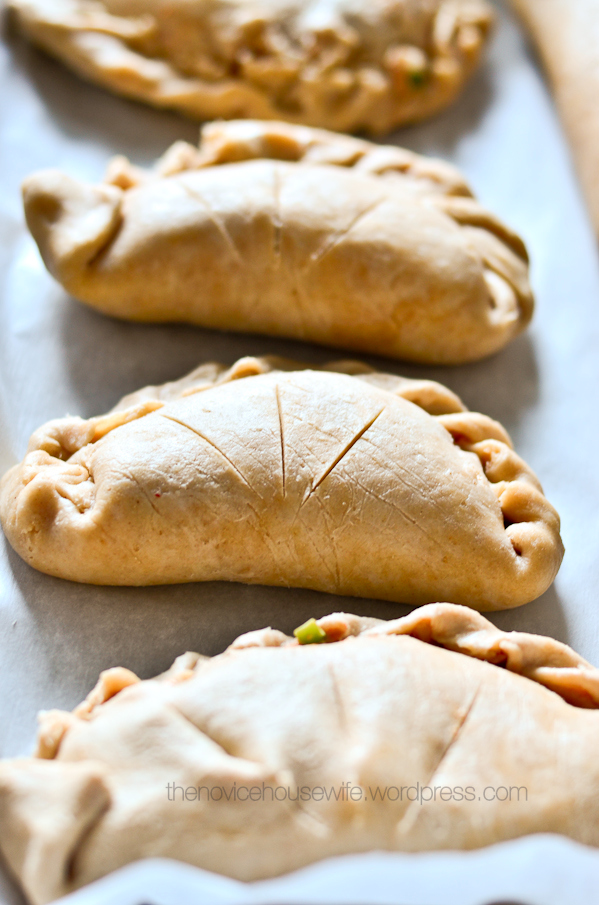 This post has been in my folder for a long time and what’s a better day to post it than at the end of the four four-day celebration of Queen Elizabeth II’s Diamond Jubilee!

If you have been watching the coverage on TV of the the celebrations, I am sure you have been enamored by the grandeur that they were. Of course critics have argued that at such tough economic times do these celebration seem befitting. To avoid any debate, I will just stay clear off that topic(although there is a part of me that agrees, but this is a food blog and I want to keep it that). But I do understand that it is a big deal and maybe at such times you do need a reason to celebrate, even if it seems frivolous.

Nonetheless it was fun. It was like watching Kate and William’s wedding all over. And as befits a big British occasion, the rain  was persistent and relentless. 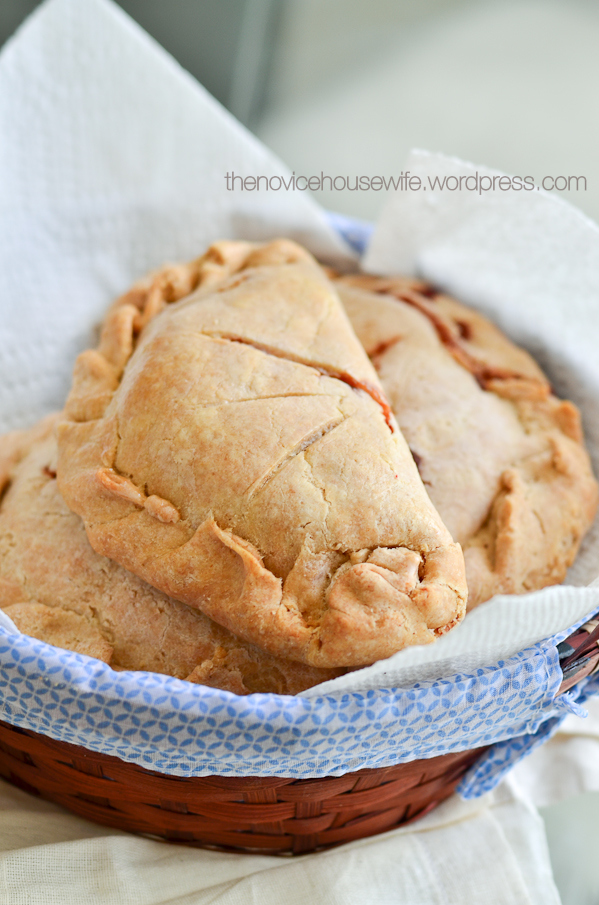 In line with the current celebrations and because British had such a major role in Indian history, I thought of posting on GMT a recipe to mark the occasion- Chicken Tikka Pasties.

If you have never heard of pasties before, let me just clear I know my spellings and I am not missing an “r” in the word pasty.

A pasty is a meat pie thought to have originated in Cornwall, England in the 1800s.

The origins of the pasty are unclear, though there are many references to them throughout historical documents and fiction. The pasty is now popular world-wide due to the spread of Cornish miners, and variations can be found in Australia, the United States, Mexico and elsewhere.

Traditionally the meat of choice in the pasty has been beef, but I got the idea of using chicken tikka from this British pub in Phoenix that serves such unique fillings of pasties. If you stay in Phoenix or ever do go there, do visit the place- Cornish Pasty Company. You will love it! 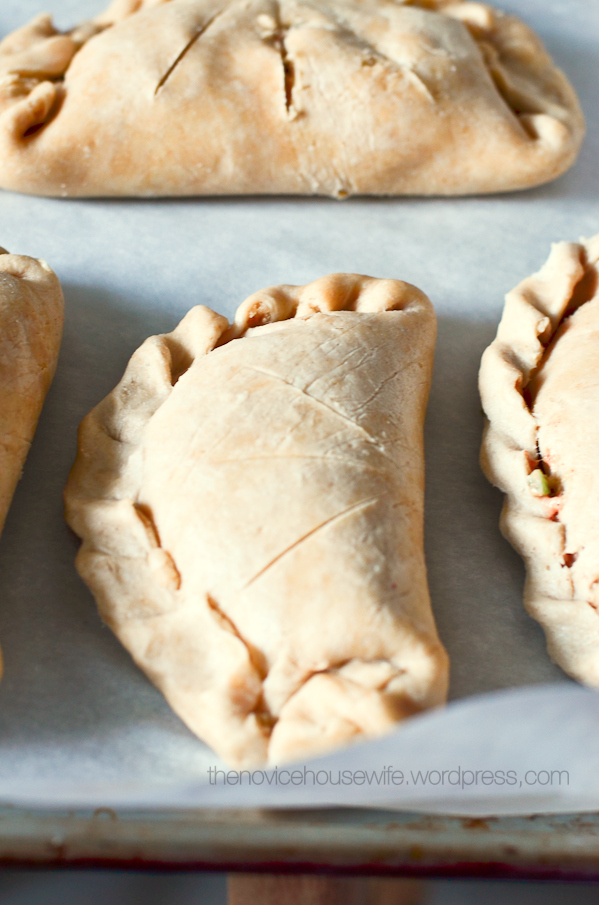 The first time I made these were for my coffee group friends. I had made them mini sized, so that it would be a more favorable size for coffee. Everyone loved them. I served them with a mint yogurt dip, the way the Cornish Pasty serves them. Unfortunately, I could not take any pictures, since they all got over. I was left with some filling and made some more pasty dough, but with whole wheat flour this time. I also made them bigger. Both were equally delicious.

These pasties are very easy to make. The filling requires no prior cooking so that’s less work. Just chop the chicken, potatoes and bell peppers and mix it in the yogurt marinade. Making the dough also just takes 5-10 minutes.

The dough can be made a day in advance. Overnight marination for the chicken is great. So actually both could be made a day advance and filled and baked the day you are ready to serve them.

You could also bake them and freeze them. These freeze really well. When ready to serve just reheat them in the oven at 400F for a 10-15 minutes till hot, and you have a great meal in hand.

With the veggies, chicken, and by using whole wheat flour and baking them, this makes for a pretty healthy meal as well. And served with mint yogurt dip it’s absolutely perfect.

You could also use store bought pie dough, if you are in a hurry. 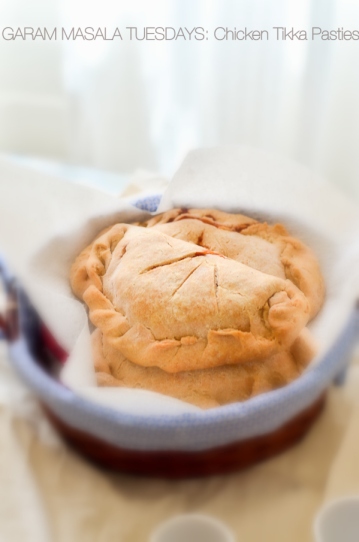 This is a dish that just needs 15 minutes of pre-prep. Shaping and filling takes a little time, if you are not a pro at rolling, but that too isn’t too much time, especially if you take in account the end results of the dish!

Recipe for dough adapted from here

For the pasty dough: 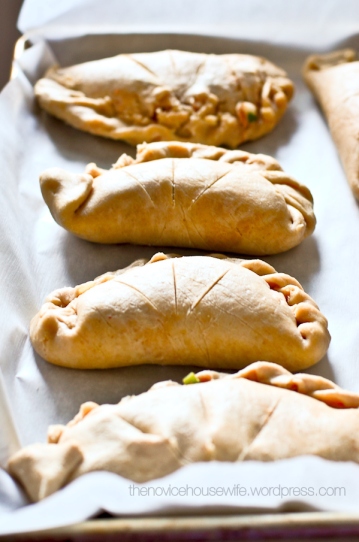 When Ready to Make the pasties:

NOTE: Like pastry dough, pasty dough should be handled as LITTLE as possible to ensure flakiness. So, *handle with care* !

For the mint yogurt dip- in a bowl, whisk together yogurt, water, a bunch of finely chopped mint, finely chopped roasted garlic, salt, pepper and little vinegar. (Sorry don’t have a recipe here. Will try to update one next time I make it!) 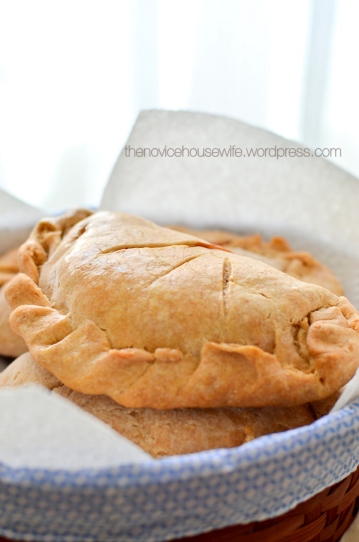