The “pull-apart-bread” bug has finally bitten me.

In fact, it bit me long back- when Joy the baker had made her pull apart bread.

Then, Kitchen corners did a pull-apart bread- a blueberry pull apart bread.

I looked at it and wanted to make it but did not!

And then came this pull-apart bread on Willow Bird Baking.

In between there were many other pull apart breads . But the pumpkin one did the trick.

There had been a can of pumpkin puree (that Damaris had sent) in my pantry for a looong time.

I had kept it for a pumpkin pie, to celebrate fall days, but those plans were thrown away when I saw this pumpkin bread. Of course my history with pie failures had nothing to do with it. The bread just screamed fall and it had to be made.

Plus, that butter rum glaze was too good to give a miss.

As Julie puts it:

This sticky, sweet pumpkin pull-apart loaf is irresistible. It’s made from layers of fluffy pumpkin yeast dough coated with browned butter, cinnamon, sugar, and nutmeg. Let it cool until it has just a hint of warmth left, drizzle on some glaze, and enjoy — preferably with the windows open to let in a crisp autumn breeze. 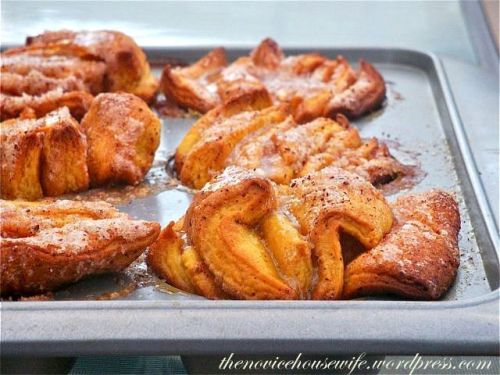 Since I planned to send it to V’s office on Thursday, I decided to make pull apart muffins (kind of like monkey bread muffins), so that it would be easier for everyone to have a muffin to themselves.

Truth be told, this way I would be able to keep 2-3 for myself and V and mom, without spoiling the whole effect of the bread.

Yes, I am greedy that ways!

While the bread is great as is, next time I will be adding a little spice to the dough itself and some crushed pecans to the filling. It doesn’t need it but, then, I love pecans on anything!

Adapted from here and here.

Julie mentions to bake until the bread is dark golden brown on top, mentioning that if you take it out at light golden brown, it’s liable to be raw in the middle. I followed her, but maybe I overdid it- the edges became to crisp from overbaking. My mom (and I) actually liked the crispiness, but in case you don’t just be careful about the browning.

I made pull-apart muffins, but this is great as a bread too. Do check Joy the Baker’s site for folding tips.